Posted on 5th November 2019 by webmaster

The News-sheet for November is now here!

The Psalm for today begins with “Why are the nations in tumult….” Ps 2.1

The Psalmist goes on to make attempts to address, if not answer, this opening question.

In some parts of the world – among them Britain and several of the Commonwealth countries – next Sunday will be ‘Remembrance Sunday’. Here in Germany where we have made our home, some of us briefly, others for ever, the following Sunday will be ‘Volkstrauertag’. I believe that in their following on consecutive weekends, we have a powerful reminder that in war – everyone loses and no one wins, and the costs are born by future generations too.

As an international Church and worshipping community we embrace (or at least attempt to) all the strands of our rich diversity, both Christian and cultural. For many of our worshippers whose origins lie elsewhere in the world, the following two Sundays will be Sundays in the Kingdom Season. Last year we used the Kingdom readings but our sermon and our prayers were focused on Peace. So it shall be again this year. Though some of us will be wearing poppies.

About a year ago, I did an internet trawl, simply out of curiosity, to see what Remembrance Day equivalents existed in other countries. It is a work in progress and not all nations have such a day, while some have more than one. The choice of date and what happens on the day varies depending which particular conflicts or national traumas are being reflected on. This is not only interesting, but helps me in my praying for the nations. If a particular country chooses to mark a particular civil war, or a genocide…. It means that in some way that conflict, or terror, or violence was a defining feature of the local or national identity and will thus have influence in all sorts of areas of public life still.

In Britain, Remembrance Day observance has been transformed in recent years. Almost gone are religious observances with involvement of uniformed groups, unless you live rurally. Instead two things have taken their place and in so doing have grown vastly in engagement if not involvement.

Where services do still take place – the content too has changed. The focus of the silence and the ‘remembering’ used to be ‘the fallen’. Now not only has the number of conflicts been added to, but also where and why they have happened. Added too has been the recognition that survivors too suffered, as did civilians and indeed animals.

Added too has been the growing idea that we can all contribute toward peace, and a commitment to do so is articulated in the most recent versions of the Common Worship Remembrance Sunday liturgy.

Perhaps we will use that this coming Sunday or next year…..

May I invite you this week ahead of the coming two Sundays to pray for:

“Merciful God we offer to you the fears in us that have not yet been cast out by love:
May we accept the hope you have placed in the hearts of all people and live lives of justice, of courage and of mercy; through Jesus Christ our risen Redeemer.”

“Most Holy God hear our prayers for all who strive for peace, and all who fight for justice. Help us, who remember the cost of war, to work for a better tomorrow; and as we commend to you lives lost in terror and conflict, bring us all, in the end, to the peace of your presence; through Jesus Christ our Lord.” Amen.

Remembrance Day is a memorial day observed in Great Britain and other Commonwealth Countries since the end of the First World War to remember all the members of the Armed Forces who have died in the line of duty in conflicts dating from the First World War (which was meant to be the war that ended all wars) right up to the present time – the Second World War, the Falklands, Iraq, Afghanistan. The red remembrance poppy has become a familiar emblem due to the poem written by the Canadian medical officer, Colonel John McCrae, at his field dressing station during the second battle of Ypres in 1915. It begins:
“In Flanders fields the poppies blow, between the crosses, row on row.” The red poppies were about the only thing that did grow: in winter the land was a sea of mud and in summer a plain of baked mud.”
These poppies became a symbol of hope for the soldiers.
The money from the sale of these poppies is administered by the charity The Royal British Legion which uses the money to help and support Service and ex-Service people and their families who are in need. We ask you to give generously to this charity so that they can continue their valuable work. I will be selling poppies in church on the 10th November.

Fliers for the bazaar will be in church from Sunday… please spread the word and speak to Alison about how you can help… baking, making jams and chutneys, helping set up or sell things on the day, and bring your friends along… 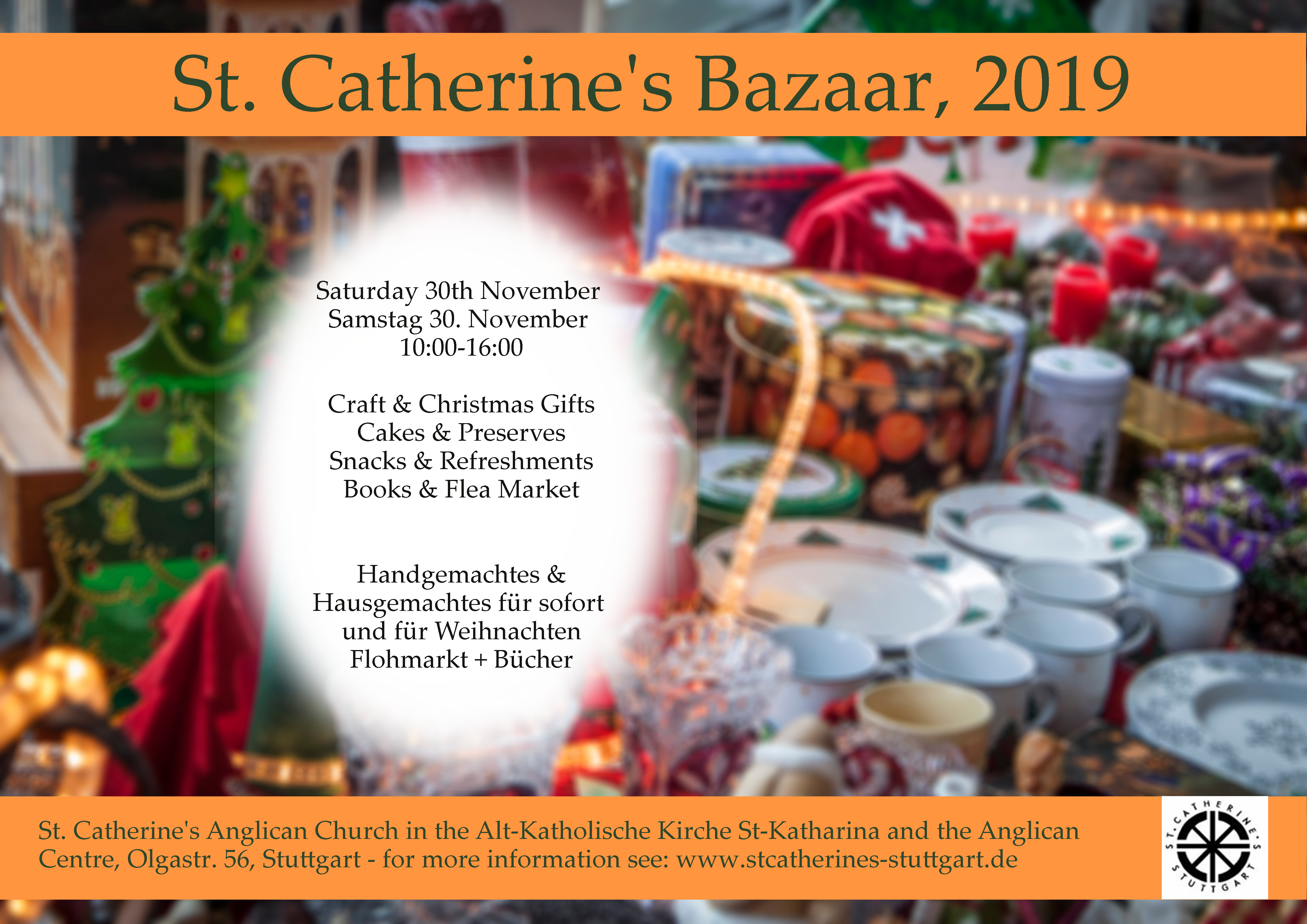