Posted on 19th November 2019 by webmaster 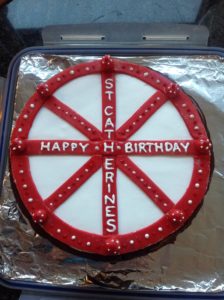 On Sunday 24th November we will be celebrating our Patronal Festival. A patronal festival is the celebration of the Saint’s day to which the local church is dedicated, St. Catherine is commemorated on 25th November. We will pray for our church, its life, ministry and future… and there will be cake.

#reflectionsforthisweek – The message of St. Catherine: be resolute !!

The ‘Monastery of St. Catherine’ was built by the Roman Emperor Justinian (around 482 to 565 AD) at the foot of Mount Sinai to protect the monks living in that region.

Its name is derived from a legend which tells that the corpse of St. Catherine, martyred for confessing her faith in Jesus Christ, was carried by angels from Alexandria to Mount Sinai. Everything else we know about Saint Catherine comes from legends too. But legends are not merely fiction: they are always based on a verifiable historical event. The legends surrounding St. Catherine have their roots in the Great, or Diocletian, persecution of Christians (303-313), regarded as the last and most severe persecution of Christians in the Roman Empire. St. Catherine stands for countless unknown victims of this and other persecutions.

The stories about her bring together many historical details. These include the imperial cult, whose purpose ultimately was to unite the empire’s many and diverse peoples – and on the other hand, the fact that the Christians could not accept the cult, frustrating the Emperor’s unification aims. The legends also reflect the influence of individual Christians’ courage in the face of death – making their faith attractive to thoughtful contemporaries. At the same time, there must have been Christians whose resolve weakened when they found themselves in mortal danger, and who denied their faith – a problem that many Christian communities had to grapple with.

The legends make St. Catherine an example of someone who was initially a seeker, an inquirer, who after her baptism became a resolute young woman who followed her chosen path fearlessly and was ready to talk about her faith, trusting in divine assistance (see Mark 13, 3-13).

Mount Sinai points us in the same direction: it stands for divine revelation and the Ten Commandments, God’s rules for life. 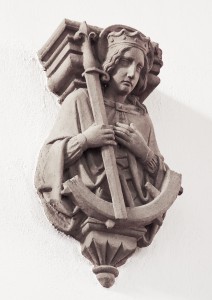 It was Catherine Masson, the founding benefactor, who chose our patron after her Christian name. That means the task for our communities (both Anglican and Old Catholic, who now worship here) is to allow ourselves to be challenged by this patron saint. We don’t face persecution today, thankfully. But what is expected of us – and this is certainly an area in which we still need to learn and grow – is that we are resolute in our faith in the God, revealed through the life of Jesus Christ, and resolute in our decision to follow him. But decisions always have two sides: affirming what we recognise as true, and at the same time rejecting everything that contradicts and conflicts with that truth.

we pray this week for –

Prayer extra
For an organist for our Carol Service on 15th December, and other Christmas services – practically, if you know anyone who can play the organ please ask for their help! 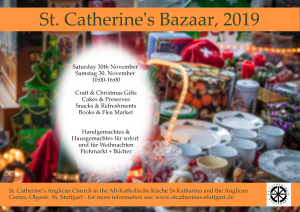 The News-sheet for November is now here!