Posted on 3rd December 2019 by webmaster

It is always a joy to begin a piece like this with Thank Yous.
Two days ago St Catherine’s opened its doors for the annual Bazaar, but the planning and work towards it goes back many weeks.
So Thank You – to Alison, Bernd, Chidon, Christopher, Edeltraude, Eric, Frances, Gudrun, Howard, Jackie, Jason, Julie, Kingstone, Knut, Lauris, Philomena, Rainer, Renate, Roger, Salam, Shukri, Susan, Tim, Wolfgang and anyone who slipped in unnoticed…

This coming Sunday, 8th December, our children and young people will take the stage and the lead in their version of the Nativity in the context of our usual Sunday Eucharist. So an anticipatory “Thank You” to them, also with parents and leaders all.

One of the words most associated with this time of year is “traditional”. There are family traditions, traditional Christmas markets, we look for traditional cards and traditional gifts, search for recipes of traditional treats and each have our own tradition of Advent and Christmas decorations. For many people music is an important part of the Advent and Christmas tradition. In the introduction to a 1983 Carol book the author wrote: “In our technological age, the simple pleasure of communal singing at Christmas has endured, and carol music, “the ancient, unalterable music of the people” still brings cheer.”  Technology has advanced dramatically in the last 35 years, over the coming weeks we will make use of that change and feature a link to a different Advent Hymn or Christmas Carol on our website and facebook page every day. We use the modern to connect with that which we think of as traditional – and yet carols were originally “the music of the people”, they have their origins in folk songs and folk music, and were traditionally sung in homes and public places, but not in church, where some felt that only Psalms were suitable for singing. For those who enjoy some history – the Traditional service of ‘Lessons and Carols’ is actually only just over a century old. It is said that the service was created by Bishop Benson to discourage a different festive spirit found in the local Cornish pubs and was influenced by an idea of George Walpole, at the time Succentor of Truro Cathedral, and the future Bishop of Edinburgh. They sought to bring the people and the carols out of the pubs and into church. In 1880 the first Nine Lessons and Carols service was held in Truro and attended by 400 people. The tradition of carols in church may be relatively recent, but the Bible Readings these carols sit alongside date back between two and three thousand years. The hauntingly beautiful poetry of Isaiah, alongside the cruelty of nature and of humankind together tell a story. The Carols that were written to tunes that would appeal to those original Cornish pub dwellers, they tell the same stories, in a different way.

In recent times Christmas music has become more secularised, so why do some still prefer a church setting rather than a secular ‘sing along’ option? For many, the story told by the Lessons and Carols has the purpose in leading us into prayer. Political oppression, refugees, homeless couples and genocides are sadly not events consigned to the Biblical era. Advent is the season of Hope and those of us who will gather once again at the Leonhardskirche this year for our “Festival of Lessons and Carols’ will bring the destitute and despairing to God in prayer and will turn our prayer to action through the opportunity to give financially to two projects (one local and one global) thus offering some Hope to those who unlike us, do not have warm homes to return to, friends or family to share the festival with, the simple assurance of knowing we are safe.
So from our carol service – a sneak-peek…….

“The people who walked in darkness have seen a great light; those who lived in the land of deep darkness – on them light has shined.” Isaiah 9 v. 2 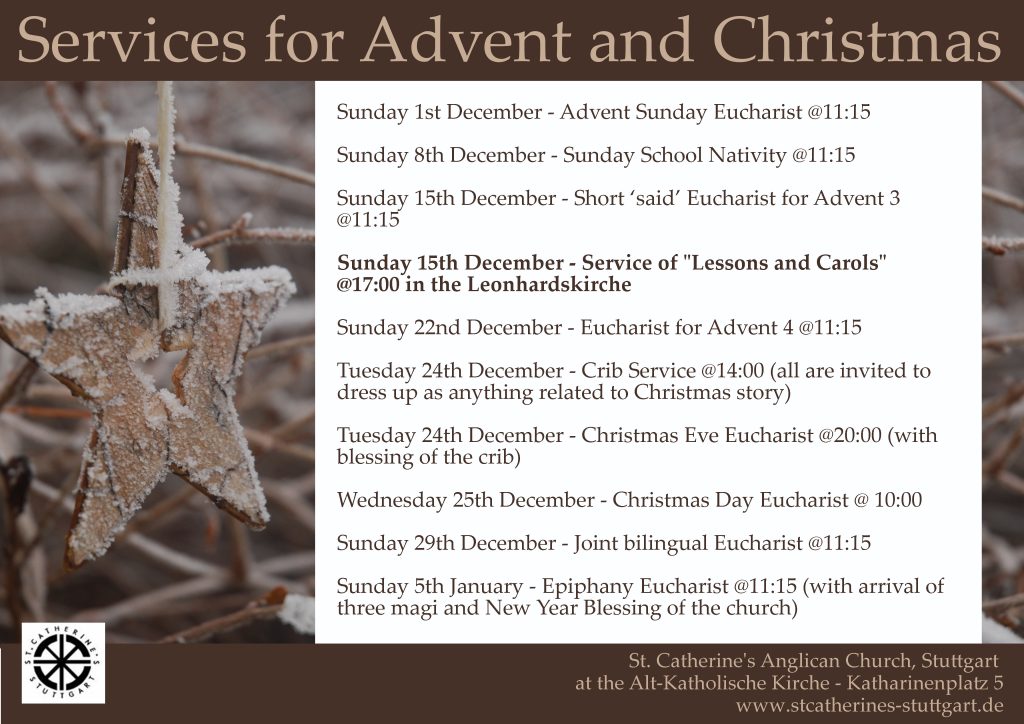