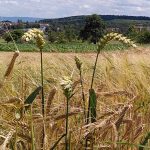 The Jewish and Christian Scriptures give eloquent expression to the creative power and wisdom of God. It is therefore a natural instinct of worshipping communities to develop patterns of worship and prayer around the agricultural year, that sit alongside the two epic journeys in the Christian calendar and all the other things that are there for other reasons. Ancient society lived close to the land; recent ‘movements’ and a more pragmatic urgency, have returned the need for such a focus to us.

The ancient (and biblical) Jewish festivals of Passover and Unleavened Bread, Weeks and Tabernacles all have agrarian roots.

The Christian tradition has assimilated, but with differing emphases and in different times and places, such festivals. Much of both traditions is bound up with the need to provide food to sustain human life and the accompanying sense of a proper humility before God as a source of all things, gratitude for his goodness, and responsibility in stewarding the resources of the earth.

The Rogation Days (from the Latin rogare to ask) are the three weekdays before Ascension day. For quite a long time now however, many churches have observed Rogation on the Sunday preceding Ascension.

Originally, the Christian observance of Rogation was taken over from Graeco-Roman religion, where an annual procession invoked divine favour to protect crops against mildew. The tradition then grew of using processional litanies, often around parish boundaries, for the blessing of the land. This procession concluded with a mass (Eucharist).  The poet George Herbert interpreted the procession as a means of asking for God’s blessing on the land, of preserving boundaries, of encouraging fellowship between neighbours with reconciling of differences and of charitable giving to the poor. The tradition of ‘beating the bounds’ has been preserved in some communities, while others maintain the traditional use of the Litany within worship. In more recent adaptations petition for the world of work, for accountable stewardship and prayer for local communities have come to be included.

In an urban and culturally diverse Chaplaincy context – the concept of place is more diffuse, less local. Prayer can be used for the city which is the new or current ‘home’ and the place which we now all share at least at this point, prayer for the country that has welcomed us. Prayer can be used to pray for places still ‘thought of’ as home, right across the globe. Neighbourliness in this context takes on a different meaning – perhaps of ecumenism, perhaps including those we seek to serve through our Refugee Programme. Fellowship is expanded to include new friendships however fleeting and transient and indeed fragile, as a call to reach beyond ourselves. Much can be learnt as we gather and learn what responsible stewardship means in different cultures and for different parts of the world, making both learning and prayer more real.

In a Pandemic context – the concept of place and of people needs to be reclaimed.

#NamesNotNumbers – to recognise that behind the statistics of illness and death lie real human beings created by God and loved by families and neighbours and friends and colleagues. This year we might focus on this at All Saints (1st November) or All Souls (2nd November).

#PlaceNotProgrammes – to remember that beyond the narrative of the highest death toll and the lowest vaccine roll out… the challenges of poverty and climate change, of unemployment and illiteracy, continue and also to reclaim the beauty and wonder and all that can be celebrated in Place, which would fit well in Rogationtide, inviting us to celebration and prayer both. This year on 9th May.