Chaplain’s musings on peace and remembrance

Posted on 7th November 2018 by webmaster

#thoughtforthisweek
“What really is the difference between the commemoration of an atrocity and the perpetuation of a grievance?”
Some version of this question (though usually more emotive and less articulate) has been floating around for many decades; making reference to the various and ever increasing Memorial / Remembrance type days across the world, marking the conflicts local and indigenous, as well as further afield; making reference too to an increasing number of people groups (what used to be called ethnic minorities) whose genocides and other atrocities never made it into the history books; making reference to Truth Commissions and other such bodies.

This coming Sunday is Remembrance Sunday in the UK and some of the Commonwealth and ex-colonial countries, though that number shrinks annually as nations choose their own date to mark more local conflicts, although in this way they still mark the sacrifice of very many nations who fought not only in the world wars, but in the countless conflicts across our world throughout the rest of the 20th Century.

We all thought the world had moved on. Yet more people than ever live in Conflict Zones or attempt to escape from them. The political changes right across Europe and in the States, with the Far Right gaining traction even in South America, have seen an unprecedented rise in race related crimes and violence.

We at St Catherine’s are an International Worshipping Community. Pulling all those threads together I would like to offer a Peace Service next Sunday rather than a Remembrance Sunday Service. Our focus will be on praying for peace in our world and in local contexts, and our role beyond prayer. I hope it will be a service All members of St Catherine’s will find relevant and engaging. It will of course be set in the usual Eucharist which in itself is profound. The children will have their usual Sunday School class.

#foryourdiaries
Our Patronal Festival – “Happy Birthday” St Catherine’s falls on Sunday 25.11.18
The children will be involved in this and you should contact Marianne if you are going to be there on that Sunday. children@stcatherines-stuttgart.de
Christmas Bazaar – Our Bazaar this year is taking place on Saturday, 1st December from 10 am until 4 pm in the church, the side room and the Anglican Centre. As every year we are asking for helpers: 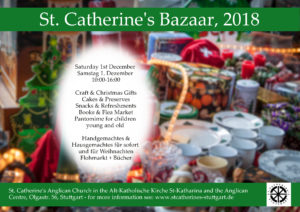 And LAST BUT NOT LEAST! Buyers, buyers, buyers! So spread the word. Flyers will be at the back of the church and in the Centre for distribution.
Please let me know how you can help, even if it is only for a short stint during the course of the day.
Alison Seyerle – warden@stcatherines-stuttgart.de

Remembrance Day is a memorial day observed in Great Britain and other Commonwealth states to remember all the members of the Armed Forces who have died in the line of duty in conflicts dating from the First World War. This war was meant to be the war to end all wars but since then there have been many other wars – the Second World War, wars in the Falklands, Iraq and Afhghanistan and other conflicts still continuing the world over. The red remembrance poppy has become a familiar emblem due to the poem written by the Canadian medical officer Colonel John McCrae at his field dressing station during the second battle of Ypres in 1915. It begins: “In Flanders fields the poppies blow, between the crosses, row on row.” The red poppies were about the only thing that did grow: in winter the land was a sea of mud and in summer a plain of baked mud. They became a symbol of hope for the soldiers.

The money from the sale of these poppies is administered by the charity “The Royal British Legion” which uses the money to help and support Service and ex-Service members and their families who are in need. We ask you to give generously to this charity so that they can continue their valuable work. I will be selling poppies in church on Sunday, 11th November. This year Remembrance Day commemorates the end of the First World War 100 years ago. The millions of soldiers who died fought for our freedom and our peace, for which we must be eternally grateful. By remembering them we must guard the freedom., keep the peace they gave us and never take either for granted.
Alison Seyerle
Churchwarden